character20n20 Challenge community (at livejournal) If you decide to grab any just leave me a comment ;)

Its been busy here with Owen and Michael. Mikey is teething and Owen is in several activities that keep me busy during week. I thought I share a picture I took of Mikey I sent to my mom - since I found crab sunglasses she bought Owen. Also download the demo for Avengers: Battle Earth. My hubby thought it was so fun to watch Owen play he uploaded a video to his youtube channel. (Using outdated icon my hubby is now a 38 year old kid since Saturday.) 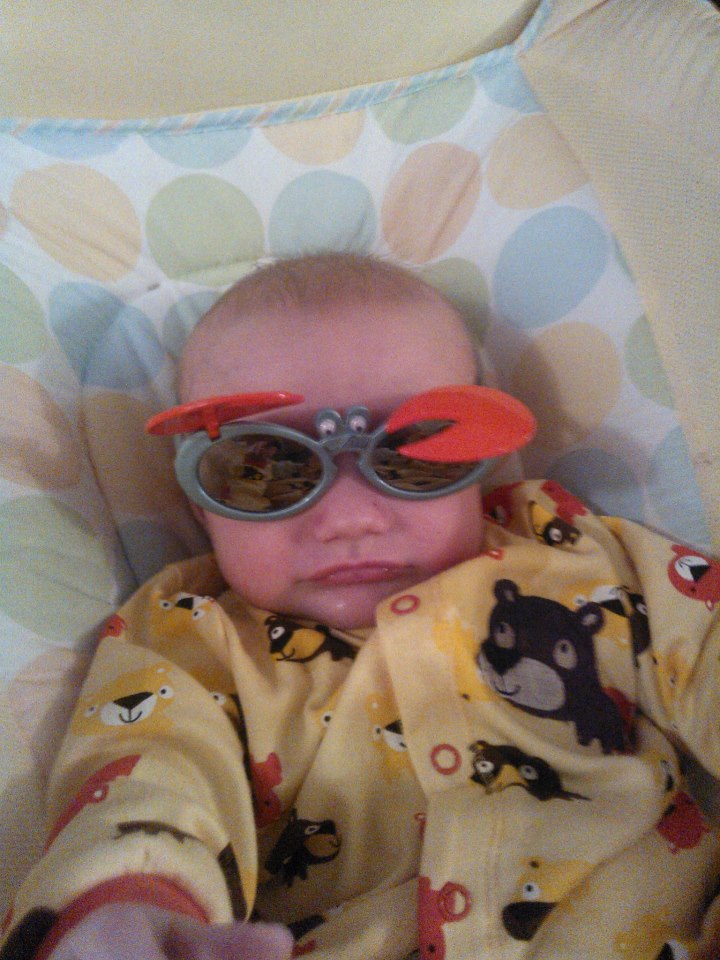 Michael just finished up the anti-biotics yesterday. He is doing much better his prolonged cough is gone. What the scariest part of having pneumonia was that he acted like himself - happy and content except for the cough.

Kyle took Owen to a birthday party today after his hockey practice. Owen was excited it was the first one he was invited to other than his cousins. He turns five this coming Friday and I submitted his picture for milestone portion of the new channel I watch in morning before he starts school. I think he going to be excited to see himself on tv. He been wanting to get on disney birthday wish on his channel but they only pick 15 people for entire month and he hasn't got on it yet I've been sending his name in since deadline before his second birthday.

Owen is becoming a real sweetheart with his little brother. The other day I was doing laundry and he was helping me - then we heard Michael cry. Owen ran upstairs so I took time to refold the stuff he folded. Michael stopped crying during the time so I went up when Laundry was done to find Owen was feeding his brother.

I fell behind on my 20in20 challenges I have two more to complete before tomorrow. I have the Criminal Minds one almost done but haven't even started Castle icons. Fun Fun Fun ....

It's been chaotic here - A cold has been spreading through our family. Michael started feeling sick last Friday and he was still coughing a lot on Monday so got him an appointment yesterday. Doctor decided it was best to do a chest x-ray since back in November he was hospitalized for a unknown caused fever. His x-ray came back showing he got early stage of pneumonia. He is at home on antibiotics and we our family doctor again tomorrow for a follow up. I am very happy that Michael over is very content - he is very active and playful and doesn't have fever. He takes his medicine like a champ. Mikey will eat anything!

I honestly wanted to bonk my husband on head yesterday after him knowing I spent several hours at doctor office/diagnostic imaging place. He comes home and acted like I did nothing and he had the right to fuss about stupid stuff ... like me not seeing a pasta sauce in cabinet. I was thinking once again - I get noticed for the stuff I don't do and not get any acknowledgement for stuff I have done. Since I did clean half the house up as well as doctor appointment.....

Just needed to vent a tad ... but I cheered up quickly with some of the pair of characters for the mystery fic challenge at atlaworld. It's getting me back in rabid shipping everyone with everyone again.... I'm excited to see the stories even if the interaction required isnt romantic between characters people got stuck with.

I decided to revive atlaland over at dreamwidth (atlaworld). I missed running it after my pregnancy hiatus. Love to see more peeps there - open id can be used at dw version if anyone doesn't have an dw username. Anyone can see challenges because I am allowing open id so come and check it out. Join me if intrigued :)

Been in bed with a cold over the past few days, I excited to see so many recs for yuletide that I will check out.

Also Christmas as great. Both boys had a fun time. I don't think I can turn anywhere in the house without running into something batman related. :D

character20n20 challenge. I didn't realize Jareth had like one expression on his face during entire movie. Curse your serious face goblin-king

Owen is loving being a big brother! He is excited about Christmas, he tries to explain to Michael about how much fun it is. He is also enjoying junior kindergarten this year - especially a little blonde girl in his class. He always says he likes this and that person. He said he loved Olivia. ;)

Owen also started speech therapy since he often doesn't pronounce the end sound in words - it makes it hard to understand since he speaks a million words a minute.

Michael turned two months a week ago. He a happy little guy. We went to a party last Saturday and people told Kyle that Michael was the most mellow baby they ever seen.

My parents complained about lack of photos and videos of baby Michael.